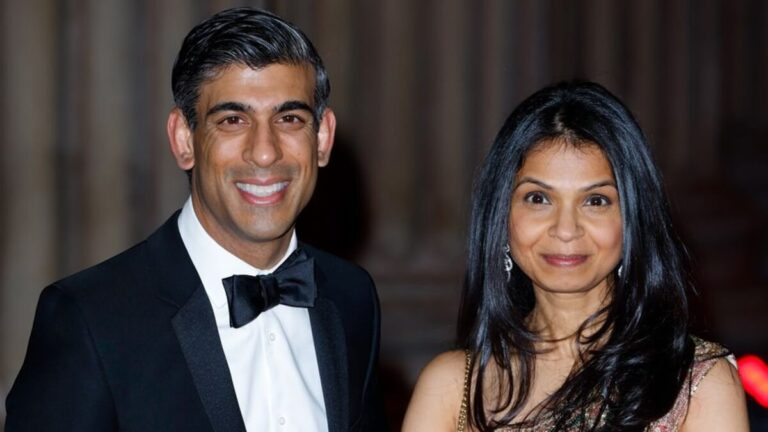 Akshata Murthy, the wife of the new British Prime Minister, Rishi Sunak, is the heiress of a prominent Indian family, representative of those “new royals” who is taking over British society, the first lady richer than King Charles.

To support him in this ambitious adventure, in which he will have to bring stability to the United Kingdom and do better than the one who preceded him, there will be his wife, Akshata Murthy, 42, already at the centre of the news, not only political but also worldly on the road of his illustrious birthplace.

She is the daughter of award-winning Indian Narayana and Sudha Murty, who, according to the British media, have an economic legacy “that makes King Charles III pale.”

The successful career of the parents of the new prime minister’s wife began with her father starting an IT company, which is now worth around £ 3.5 billion; her mother, for her part, was the first Indian female engineer to have founded one of the most successful automotive companies in the country.

Growing up with her grandparents, Murthy began her career – just as successful as that of her parents – in the United States: after studying Economics, she specialized in Fashion Design in Los Angeles, then earned a master’s in Business Administration.

At Stanford, where the spark with Rishi Sunak, with whom he had two daughters, took off.

Today Akshata Murthy is a successful entrepreneur – in 2007, she founded her own fashion company, then reached an epilogue three years later – heavy with investments in some of the most important companies in the country.

And, precisely by this privileged status and this position that she has made her one of the most powerful women in the UK, the wife of the new prime minister is much more than this: the fabulous Indian wedding of 2009 with which they consecrated their union at home has only accelerated the career of Akshata Murthy, already well underway, even if she started from secret bases.

There is no lack of controversy surrounding the figure of these characters so prominent in the British political landscape, destined (hopefully, given the recent events involving Liz Truss) to change the fate of the country, and undisputed protagonists of a society that always di more is opening up to the aristocracy no longer linked only to blood and a high-sounding genealogy, as it is, for example, for the royal family.

Last April, when Sunak was Chancellor of the Treasury, an investigation into his wife’s finances had caused quite a stir.

Administrator abroad, for example, in India. This situation, considered by many political opponents of the Sunak to be lacking in transparency, forced Murthy to give up his status, in view – it is said – of her husband’s rise to power, in the first position for the role of British premier for some time and ready to grab the Downing Street mansion after Truss.

Even his father’s company, Infosys, still operates in Russia despite the international political situation. The choice of many foreign multinationals to no longer work in President Putin’s territory has been and still is contested.

None of this, however, seems to be an obstacle to the social ascent of the Sunak: Rishi and Akshata Murthy seem to know what they want and, above all, how to take it.