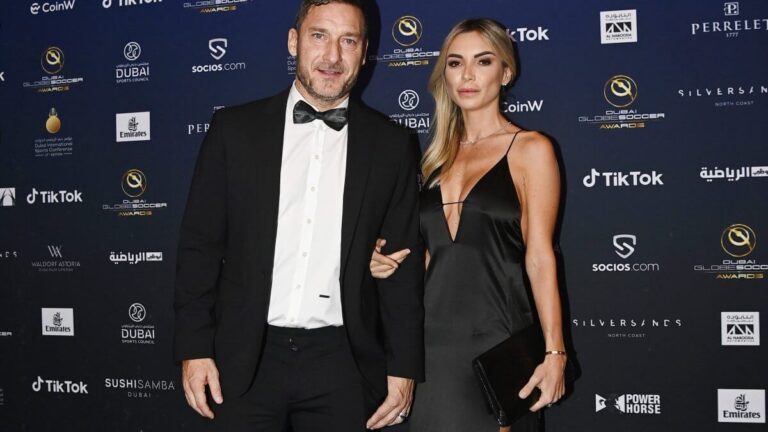 The former Roma footballer Francesco Totti and his partner Noemi Bocchi paraded in front of photographers during the Globe Soccer Awards.

Francesco Totti and Noemi Bocchi made their debut as a couple on the red carpet of the Globe Soccer Awards, where the former Roma footballer was present as a Serie A ambassador.

A significant event in the last few hours in Dubai was made even more precious by the presence of Noemi and Totti.

They paraded hand in hand in front of those photographers they were trying to escape from until a few months ago when the news of the separation between Francesco and Ilary Blasi was still too fresh.

The information about the new love of the former Roma captain was viewed with extreme suspicion.

Beautiful, very elegant and very much in love, Totti and Noemi have once again proved to be united, as indeed they had done in these first months of their relationship when the gossip, as well as the haters, attacked them harshly, accusing Bocchi above all of being the cause of the end of the marriage between Francesco and Ilary Blasi.

While in Dubai, Noemi Bocchi and Francesco Totti paraded on the red carpet of the Globe Soccer Awards, an event which, in past years, he had attended in the company of Ilary; here in Italy, we did nothing but talk about the new photos, published by Diva and Donna, where the two had been immortalized amid moments of great affection.

In reality, not only the shots of Noemi and Francesco are taking centre stage in our country but also the latest news arriving directly from the court of Rome, where the hearings that will lead to the separation between Totti and Ilary have now begun, still unable to find an agreement that both parties agree on.

The pin of contention? The famous Rolexes that Francesco continues to reaffirm belong to her, while Blasi, for his part, claims that he has no intention of returning them since they were received as a gift from her ex-husband when their marriage was still solid and happy.