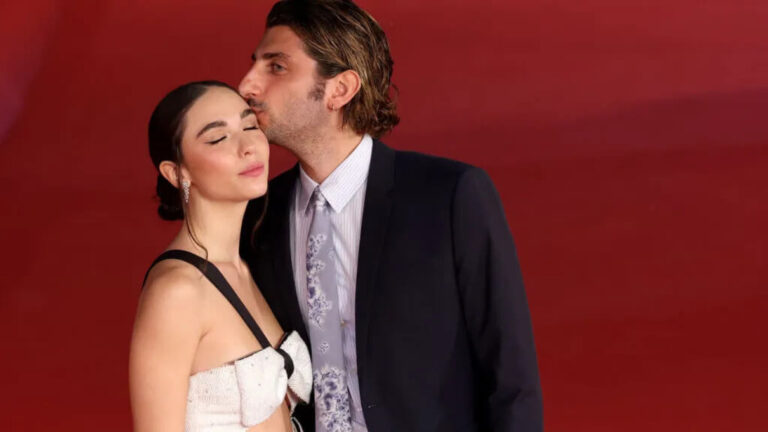 The couple Matilda De Angelis and Pietro Castellitto walked the red carpet together for the film Rapiniamo Il Duce premiered on October 26 on Netflix.

Pietro Castellitto and Matilda De Angelis are in love. The two actors walked together on the red carpet of the Rome Film Fest on the occasion of the presentation of the film Rapiniamo il duce, in which Filippo Timi and Isabella Ferrari also appear.

Beautiful, talented, close-knit and not inclined to live under the flashes of photographers, De Angelis and Castellitto share a passion for cinema and acting that, on the set of Rapiniamo il duce (streaming on Netflix from October 26), saw them fall in love until they become a couple, exactly as happens to the characters they play in the film: that is Isola and Yvonne, he stepped into the role of the king of the black market, she is a singer of Cabiria, the only nightclub still open in the Milan of 1945, now close to the end of the Second World War.

The catwalk on the red carpet in Rome marked the first public appearance of Matilda and Pietro Castellitto, who exchanged tongues, kisses and hugs, showing great complicity.

“We indulged in very long breakfasts. And we spend a lot of time together, Matilda is a simple and very intelligent person. And do you know why I like her? With her you can talk about everything”, Pietro had told Corriere Della Sera this summer after the release of the photo of her kiss with De Angelis which marked the beginning of their relationship.

Matilda told La Repubblica instead: “With him, I don’t feel I have to be the mirror of what others want me to be”, said the star of The Undoing talking about the love withCastellitto, by his side since the beginning of this summer.

“I have spent my life hearing myself say: ‘Matilda, you are extraordinary’. And I, inside myself, replying: “Thank you, this is exactly the personality that I created for your use and consumption, to hear me say it” “, concluded Matilda, who today, together with her partner, can be herself.