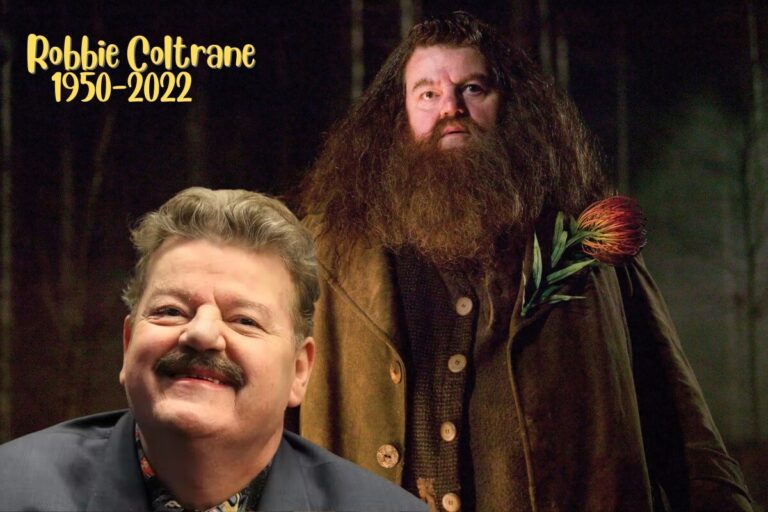 As the gamekeeper Hagrid, Robbie Coltrane played his way into the hearts of millions of Harry Potter fans worldwide. He won three BAFTAs for best actor in three consecutive years, from 1994 to 1996. Hagrid actor died at the age of 72.

Information about the actor’s death was provided by his agent Belinda Wright.

She reported that Robbie Coltrane died at the age of 72 at a hospital near Falkirk, Scotland.

The Scotsman’s career began after switching from painting to acting at the Glasgow School of Art.

The Scottish actor started as a standup comedian in Edinburgh clubs. Roles in Harry Potter has distinguished him internationally.

His family name, McMillan, was replaced during his time in theatre troupes and stand up shows by the pseudonym Coltrane, in honour of jazz musician John Coltrane.

Scottish actor Coltrane has passed away. He became known to a large audience through, among other things, the British television series Cracker and Rubeus Hagrid in Harry Potter.

Coltrane broke through in the role of Dr Edward “Fitz” Fitzgerald in Cracker’s series in the early 1990s. The series was broadcast until 2006.

Scottish Prime Minister Nicola Sturgeon tweeted, “He had such a range and depth as an actor, from brilliant comedy to hard-edged drama,” continued Sturgeon, who Coltrane described as “a Scottish entertainment legend”.

He also played in “GoldenEye” and “The World Is Not Enough”.

In 2011, he received the Bafta Scotland Award for Outstanding Contribution to Cinematography.

He graduated in Art. In 2021 he made a guest appearance in the film “Harry Potter – 20th Anniversary: ​​Return to Hogwarts”, where he talked about the backstage of working on the set. Coltrane was also seen in the crime comedy “Ocean’s 12”.

In 2006, he was awarded by Queen Elizabeth II with the Most Excellent Order of the British Empire for his services in the field of representation.

He became world famous in the role of the half-giant and gamekeeper Rubeus Hagrid in the “Harry Potter” films released between 2001 and 2011.

“He was the dream cast of Harry Potter” author Joanne K. Rowling, “His agent Wright recognized him as an outstanding actor and an intelligent person.”

The universe has also become a play. “Harry Potter and the Cursed Child” premiered in London in 2016.

Then Rowling made it clear that the stories about the young wizard were over.

To give him the fame, the real one, however, was the strange giant Rubeus Hagrid, unable to keep his mouth shut in Harry Potter and the Philosopher’s Stone, a character he would also play in all the sequels to the delight of the little fans.

“The children – he had said in an interview – come to you with big doe eyes and say: “Do you want to sign my book? And it is a great responsibility.”

Yesterday, JK Rowling recalled his “incredible talent” tweet: “I will never know anyone remotely like Robbie. I was more than lucky to know him, to work and laugh out loud with him.”

Coltrane said goodbye to Stephen John Fry, a British actor and comedian. “40 years ago, I met Coltrane for the first time. Such depth, strength and talent. Goodbye, old man,” he wrote.

Robbie Coltrane played a variety of roles in both British and American productions. He also played the former KGB agent Valentin Zukovsky in the Bond films.

Best known to a younger audience, he played the role of the half-giant Rubeus Hagrid in the Harry Potter films.

As a reaction to Coltrane’s death, the author JK Rowling writes in a post on Twitter that “He was an incredible talent, one of a kind, and I was fabulously lucky to know him, work with him and laugh with him.”

After minor appearances in series such as Flash Gordon or Blackadder, he began to stand out in the comedy program. Alfresco, in the mid-1980s, had other strong names in the cast of the following decades, such as Hugh Laurie, Emma Thompson and Stephen Fry.

The upward trajectory continued in 1987 in the BBC mini-series Tutti Frutti, which earned him a first nomination at the British Academy of Film and Television Awards (BAFTA).

The definitive leap to recognition in the UK came in 1993 with the series Cracker, in which he played Edward “Fitz” Fitzgerald, a criminal psychologist who worked with Manchester Police to solve crimes. The role won him the BAFTA for best actor three years in a row, from 1994 to 1996, and was described by the British Guardian newspaper as “an innovative construction” of a classic anti-hero: Fitz was a genius at his profession but troubled in his own right.

On the international stage, the first significant role was that of Valentin Domitrovich Zukovsky, a Russian mafia leader, former KGB agent and James Bond ally in two 007 films: “Golden Eye” and “The World Is Not Enough.”

Writer and comedian Stephen Fry is another colleague sending his condolences.

Fry writes that he was “both horrified and enamoured” when he met Coltrane for the first time 40 years ago. What depth, what power, what talent. Farewell, old friend. Will terribly be missed,” he writes.

Coltrane was born Robert McMillan in Glasgow but later changed his surname as a tribute to jazz legend John Coltrane.

“I will never know anyone like Robbie again. He was an incredible and unique talent, and I was lucky enough to know him, work with him and laugh with him. I send my love and deepest condolences to his family and his children.” writes Rowling on Twitter on Friday evening.

In 2021, in a special television retrospective that marked the 20th anniversary of the first film’s release, Robbie Coltrane emotionally reflected on the years he played Hagrid: “You could be seeing us 50 years from now. I won’t be here, unfortunately. But Hagrid will.”

Rowling has written seven books about Harry Potter, which have been turned into eight films. The first book, Harry Potter and the Philosopher’s Stone was published in 1997. The book series has over 500 million books published in 80 languages.

Since then, several so-called “spin-offs” have been made, including the film series based on the book Fantastic Beasts and Where to Find Them, which Rowling wrote.

Was Robbie Coltrane ever on Midsomer Murders?

Yes, Robbie Coltrane had been on Midsomer Murders, His pictures were also released from Midsomer

Robbie Coltrane didn’t support any football team, in an interview he told and said to be just a supporter of Football.

Did Robbie Coltrane have knee surgery?

Yes, Robbie Coltrane had knee surgery. He was in constant pain and after joint surgery in America he found relief.

What is the net worth of Robbie Coltrane?

Net worth of Robbie Coltrane is $4million.

Was Robbie Coltrane in the Harry Potter movies?

Robbie Coltrane played in all 8 Harry Potter movies. He became world famous in the role of the half-giant and gamekeeper Rubeus Hagrid in the “Harry Potter” films released between 2001 and 2011.

How much did Robbie Coltrane get paid for Harry Potter?

How old was Robbie Coltrane in Harry Potter Sorcerer’s Stone?

Robbie Coltrane was 72 years old at his death. He was of 61 when he played Harry Potter Sorcerer’s Stone

How tall is the actor Robbie Coltrane?

Yes, Coltrane was on National Lampoon’s European Vacation as in the character of Man in bathroom.

What part did Robbie Coltrane play in Harry Potter?

Who did Robbie Coltrane play in Van Helsing?

How old are Robbie Coltrane’s kids?

Why did Robbie Coltrane get divorced?

Did Robbie Coltrane grow a beard?

Yes, he grew his beard for Hagrid

Was Robbie Coltrane in Krull?

Who is Robbie Coltrane married to?

Robbie Coltrane was married to Rhona Gemmell and broke up in 2003.